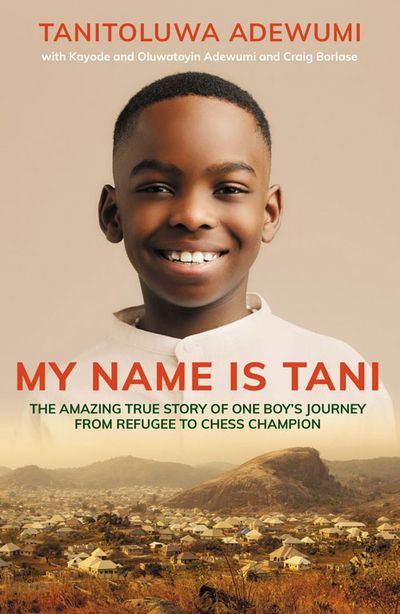 My Name is Tani: The Amazing True Story of One Boy’s Journey from Refugee to Chess Champion

For readers of inspirational stories such as Ishmael Beah’s story A Long Way Gone, Malala Yousafzai’s I Am Malala and Nujeen Mustafa’s story The Girl From Aleppo. All of whom risked their lives for a safer future. Meet Tani Adewumi whose story of survival took him from being a refugee to a New York City Chess Champion.

My Name is Tani: The Amazing True Story of One Boy’s Journey from Refugee to Chess Champion.

For eight-year-old Tani Adewumi, growing up in Abuja, Nigeria, life is good. His father, a prosperous businessman, is descended from a royal family. His mother’s family owns a profitable printing press.

Then what should have been a routine print job changes the family’s fortunes forever. Threatened by Boko Haram terrorists, fearing capture or killing, they’re forced to make a desperate move – across an ocean to New York City.

Tani’s father finds work as a dishwasher and Uber driver while the family lives at a homeless shelter. Fleeing violence only to become trapped in poverty, their future looks bleak.

The problem finds an unexpected solution when Tani joins his high school’s chess program. Discovering a rare talent for the game, he quickly rises up the ranks to compete at the highest level.

Once a pawn in a game he didn’t understand, now Tani must seize the opportunity to save himself, and rescue his family…

Author: Tani Adewumi
Format: Paperback
Release Date: 17/09/2020
Pages: 224
ISBN: 978-0-310-11245-7
Tani Adewumi is the eight-year-old Nigerian-born boy whose family escaped Nigeria with nothing as Boko Haram seized their two. Fleeing to New York City without any financial help and limited accomodation support. Tani miraculously goes on to win the NY State Chess Championship after playing the game for only a year.Craig Borlase (craigborlase.com) is a best-selling British author and collaborative writer of more than 45 books. He specialises in memoir, and his most recent book is the New York Times best-seller Finding Gobi with Dion Leonard.

My Name is Tani: The Amazing True Story of One Boy’s Journey from Refugee to Chess Champion

For readers of inspirational stories such as Ishmael Beah's story A Long Way Gone, Malala Yousafzai's I Am Malala and Nujeen Mustafa’s story The Girl From Aleppo. All of whom risked their lives for a safer future. Meet Tani Adewumi whose story of survival took him from being a refugee to a New York City Chess Champion.