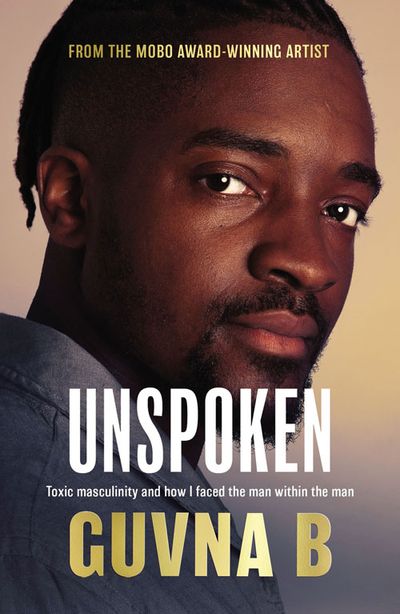 Unspoken: Toxic Masculinity and How I Faced the Man Within the Man

By Guvna B
Retailers

Men are bold. Men are brave. Men are strong in the face of fear. But what happens when that strength crumbles?

After a personal tragedy rocked his sense of self, Guvna B reflects on toxic masculinity and how being thrown into a journey of soul searching helped him find a path to authenticity.

Growing up on a council estate in East London, rapper Guvna B thought he knew everything he needed to know about what it means to be a man. But when the unexpected death of his father sent him reeling, he knew he had to face these assumptions head on if he was going to be able to overcome his grief.

In this intimate, honest and unflinching memoir, Guvna B draws on his personal experiences to explore how toxic masculinity affects young men today. Exploring ideas of male identity, fatherhood and overcoming the unexpected, UNSPOKEN is an inspirational account of Guvna’s journey.

Guvna’s artistic endeavours have always drawn on his personal experiences of life in London, bringing together themes of faith, masculinity and identity. His music addresses real issues while refusing to conform to the negative stereotypes of rap music.

He aims to inspire his audience and share the insights he’s gained through his faith. As a two time winner of the prestigious MOBO Award, winning the first accolade at just 20-years-old, Guvna’s journey has been one of breathless success and cutting-edge creativity. In a world plagued by negativity, Guvna B is a beacon of hope. No matter the medium, his work demonstrates the hope and inspiration faith can bring to us all.

Guvna also presents THE LOSS TAPES podcast, in which he talks to guests about their experience of grief and bereavement, and how they’re dealing with losing someone or something they loved. He has already interviewed The Archbishop of Canterbury Justin Welby on the loss of his daughter and the musician Nick Brewer on the loss he has faced during his time within the music industry.

Author: Guvna B
Format: Paperback
Release Date: 18/02/2021
Pages: 280
ISBN: 978-0-310-11202-0
Guvna B is a multi-award winning, record-breaking Urban rap artist from London. With the courage and integrity to resist the stereotypical trends of urban music, Guvna has carved a unique place for himself in the music world. He became the first rapper in UK history to top the Official Christian & Gospel Albums chart with his breakthrough album Secret World and his album, Hands are Made for Working, debuted at number 2 on the UK Hip Hop/Rap Albums Charts. His 2019 single Battle was streamed over 1 million times on Spotify.

Unspoken: Toxic Masculinity and How I Faced the Man Within the Man

Men are bold. Men are brave. Men are strong in the face of fear. But what happens when that strength crumbles?